Working on a duo set

I am in a phase of intensive rehearsals with Jennie Zimmermann, to develop a duo show. Starting from our artistic interests wie move forward to build a profile together. This is an excerpt from an improvisation, we both loop our voices using ableton live and some of it´s effects. Our laptops were not synchronized as we were interested in an open, ambient-like process.

The next video shows us rehearsing a vocal improvisation accompanied by my composition 'afrobeant'. The rehearsal was in preparation for our first short performance, under a tree in the garden of the Villa Kuriosum in Berlin.

Our aim was to be one element of the garden, so that our performance would be part of the whole experience of being there, so we were after making a kind of ambient, or furniture-music. The composition 'afrobeant' consists of two main melodic parts, one of which is repeated in cycles of two measures, while the other is three measures long. The piece has a calm, but rhythmic flow, some kind of a waltz, also comparable to the atmosphere of an african lullaby. To achieve a more static situation I inserted silences, which are triggered by the launch function in ableton, which can be controlled by parameters of probability. All the sounds that are heard then are still in perfect fit with the two cycles, but the surrounding silences give them the quality of fragments. I read about John Cage using chance operations to insert silence into traditional chorals and I noticed that this method is fun to apply. I like to change the probability and listen to more dense or more open versions of the music. The vocals in the video to Afrobeant are a first try, in the long run the voices may come to another level of interaction and interweaving with the instrumental parts. 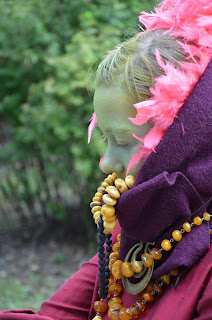 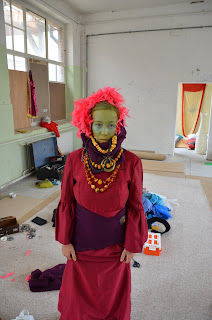 The costumes are part of our search for a profile as a duo. Being Para Hybrid, I am a poeto-sexual transgender creature, bringing along a certain kind of sleaziness and lack of seriosity. We are up to find a fitting constellation for this together. The costumes in the video above suggest that a fantasy-person and a fantasy-animal singing together. But this difference between person and animal is not reflected in the music or our way of singing. So we decided to go for a different outfit for me. 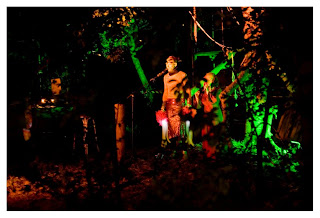 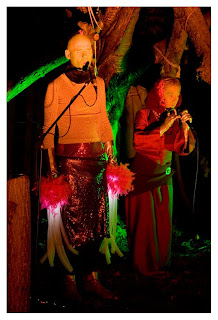 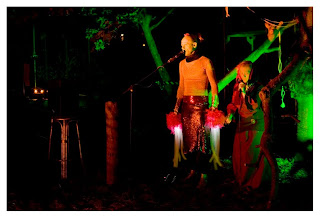 The second piece we played at Villa Kuriosum was 'dishöz', in the video above you can see us at one of the first rehearsals for this.

This composition is based on a rhythmic grouping of 4, 3, 3, 3 and 4, 3, 3, 2 impulses. The first and second part of it are nearly identical, only in the end of the second part one impulse is omitted. The first part of 13 impulses and the second of 12 impulses are combined to a cycle of 25 impulses. Jennie added a phrase with 12 impulses. By inserting one impulse of silence every second repetition of this phrase, we get 12 + 12 + 1 and so both phrases share the cycle of 25 impulses. In this video we sing first my phrase, then the one composed by Jennie. Here a sketch in ableton live, both phrases are superimposed:

(I would like to perform this composition with several singers so it becomes more lively, in this demo version we use layered loops and both phrases are sung on different pitches and with some variation in articulation.)

Combined together, the different accents in both phrases create wonderful polyrhythmic tensions, especially in the middle of the cycle of 25 impulses. The ambiguity that this combination creates makes it possible to repeat this same thing again and again, give full concentration to one momentary musical situation and I love that.
Eingestellt von Unknown um 06:25